Unfortunately, there is some debate within the astrological community about which planets are beneficial and which are dangerous for certain rising signs of the Zodiac to strengthen. This naturally results in confusion about the gemstones these particular signs should be wearing. The Scorpio lagna (rising sign) and its corresponding gemstones are often at the heart of this debate.

It is our experience in the field that Scorpio ascendants do best with yellow sapphire, pearl, and ruby.

Sharp, intuitive, and mysterious, Scorpio ascendants are some of my favorite individuals. They’re quite frequently a great source of entertainment and insight, having a dark but refreshing sense of humor and refined observational skills. Sometimes it seems as though they have x-ray vision, seeing right into the people they’re talking to for better or for worse. While they’re generally very passionate, this intensity can also cause them to become a bit manipulative at times. One of their biggest vulnerabilities is their profound sense of attachment, which when triggered can cause them to become inappropriately vindictive as a form of emotional self-defense. Authenticity and mindfulness are important in maintaining the health of a close relationship with a Scorpio.

In Vedic Astrology, Mars is the ruling planet for a Scorpio ascendant, and red coral is the primary gemstone used to strengthen Mars. In the beginning of my career as an astrological gemstone advisor, I recommended gems for the ruling planet of every sign of the Zodiac. My thinking was that strengthening one’s lagna lord with a gem could never technically do any harm.

After years of studying the effects that powerful red coral has upon Scorpio ascendants, however, I discovered that I was actually wrong about this combination being beneficial as a prescription. I have instead found that red coral produces predominantly negative results in a majority of cases, and I believe this occurs for two reasons:

1.) Mars is one of the naturally malefic planets in Jyotish, representing the roots of war and conflict in its essence. (It’s not always a bad influence for people, it can also boost courage and motivation; the effects of red coral are mostly determined by the houses that Mars overlords in the Jyotish chart.)

2.) For a Scorpio ascendant, Mars’ mooltrikona (most dominant) sign of Aries falls under the 6th house, which in a nutshell, represents conflict and obstacles.

The functions of a natural malefic, coupled with mooltrikona lordship of an inauspicious astrological house, are our most consistently applicable conclusions for why Mars appears to behave as a predominantly malefic influence when Scorpio ascendants strengthen it with Jyotish-quality red coral.

As it stands, we have heard enough negative testimonials from our Scorpio clients (and two former Scorpio sales managers at Astrological Gem for that matter) that we no longer recommend red coral as a primary gemstone for this ascendant.

We’ll use this morning’s chart as an “example person” to discuss the anticipated benefits of auspicious gemstones for the Scorpio lagna.

If today’s chart were a person, at a quick glance, I would describe them as cerebral, intellectual, motivated, mystical, somewhat socially awkward, devoted to their career path, and the kind of person who will benefit from spiritual education.

The first gemstone I would recommend is a yellow sapphire. This is the primary gemstone for Jupiter, ruler of their 2nd house (speech, income, social status) and the highly auspicious 5th house (luck, creativity, investments, education, children). I’d recommend this because Jupiter is, by nature, a very beneficial planet and also an excellent ally for Scorpio ascendants. We have had plenty of success stories from our Scorpio customers who buy yellow sapphires, so we can confirm that this combination works quite well in a majority of cases.

Jupiter is well-placed in the 10th house of this chart, in the vibrationally compatible sign of Leo, but it’s at an “old age” by degree which will stunt its ability to bring a timely sense of luck and fulfillment to the chart holder’s life. Wearing a yellow sapphire will likely lead to an increase in income, career expansion, happiness, sense of divine purpose, quicker spiritual progression, and it will also probably benefit the health and well-being of this person’s children. (Children likely aren’t a concern for this chart holder yet, because they are only seven hours old at the time of this writing, but such issues may show up down the road due to Ketu’s position in the 5th house.)

This person would also enjoy the benefits of a pearl. Strengthening the Moon will promote heightened awareness, clearer intuition, emotional fulfillment in career, support of nature, sense of respect, benefit to parents, and long-term satisfaction in both materially tangible and spiritually profound life activities.

Our Scorpio clients also report great results from rubies, the primary gemstone for the Sun. This is their best gemstone for career development, brightness, brilliance, empowerment, courage, and motivation. In this example chart, even though Sun is an ally to the Scorpio, I would exercise caution with a very large or heat-treated ruby. This is due to the Sun’s classification as a natural malefic as well as Saturn’s combustion in the 1st house, meaning that Saturn is somewhat uncomfortably close to the Sun by degree. When this kind of situation arises, I recommend a ruby that’s unheated and a one of a modest size, perhaps weighing 1-1.25 carats. For this chart, such a ruby will promote brightness and brilliance while minimizing the risk of emotional overheating and impassable mental frustration.

And now, back to the gemstones a Scorpio should avoid!

Scorpio ascendants generally do not fare well with red coral, as we’ve discussed, likely because of Mars’ predominant rulership of the inauspicious 6th house. This pairing frequently leads to conflict, drama, and unregulated distress.

For the most part, Scorpio ascendants also do not fare well with Venus gemstones (diamonds and white sapphires), likely for a similar reason as Mars gemstones: Venus’ predominant rulership of the 12th house appears to be responsible for the loss, loneliness, isolation, and overwhelming expenses reported when Jyotish-quality diamonds are worn. We have heard many cases of this combination resulting in disaster, including two or three from Scorpio women wearing huge diamond wedding rings wondering why their marriages are in disarray. (Quick related side story: A couple of weeks ago at a Vedic Astrology conference we exhibited at, a vibrant and beautiful Scorpio lady from India tested out a large Venus gemstone in our presence because it was once recommended for her. After a few minutes of holding the stone and chatting with us about Jyotish, she became so physically ill that she had to hand the gem back over and quickly return to her hotel room to lay down. She blamed this instantaneous sickness on the muffin she had for breakfast and excused herself. Not to discredit the power of a bad muffin, but I have other suspicions about what actually caused this sudden intense physiological discomfort for her.)

Scorpio ascendants historically do not do well with Saturn gemstones, either. I’m of the suspicion that Saturn’s predominant rulership of the 4th house (emotions) contributes to the Scorpio tendency to be somewhat dark, moody, and cynical. Throwing more energy at Saturn with a blue sapphire appears to promote unshakable dissatisfaction and long-term bitterness. We have yet to hear of an instance where a very powerful blue sapphire leads to increased happiness and emotional fulfillment for this rising sign. Saturn is also a natural malefic and its corresponding vibrational frequencies are inherently incompatible with Mars, or to put it in simpler terms, Mars and Saturn are considered to be “enemies.” Scorpios who wear pure, large, unheated blue sapphires almost always report an increase in obstacles, idleness, poverty, and depression. This is another pairing that we specifically don’t advise due to the multiple negative and dramatic customer experiences that have been reported to us.

Emerald for Scorpio ascendants, to strengthen Mercury, is not a common prescription. This is also not a combination I would personally recommend, because there are many auspicious Mercurian significations that can be promoted for this rising sign using more powerful gemstone combinations. Want more business success? Try a ruby, lord of the 10th house. Better communication? Try a yellow sapphire, lord of the 2nd house. Clearer mind? Try a pearl, significator of the mind. We have plenty of testimonials that these combinations work, which is why we stick with them to this day. They’re time-tested and they’re safe, assuming of course that the gemstone being worn is truly Jyotish quality. 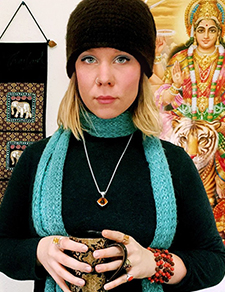 Tiffany April Raines is the Head of Sales at Astrological Gem International. Trained at the American College of Vedic Astrology and certified as a gemstone advisor through the Planetary Gemologists Association, she has been serving the Vedic Astrology community with research-based gemstone insight and advice for over 10 years. She can be contacted at tiffany@astrologicalgem.com.

Please note: In order to provide the most time and best service possible for our paying customers, we are no longer able to respond to all of the requests we receive for gemstone recommendations. We welcome you instead to try our Free Gem Report if you are still in the learning and research phase of your Jyotish gemstone journey. This can be found at AstrologicalGem.com.

14 thoughts on “Gemstones for Scorpio Ascendants”